Nothing is Impossible… the Road to the 2016 NYC Marathon

I finished Boston’s Run to Remember on May 29th in just under three hours. It wasn’t my best run. I suffered from a pulled/strained left calf muscle the entire run. So… that hurt. But there are a lot of great things that happened too. I was in Boston. I finished the race. It was a lovely 65ish degrees and overcast, compared to record heat in the lower 90s just one day before. I saw friends I really like being around. And I already registered to run it again in 2017. Here are a couple of race photos. Such a great course! 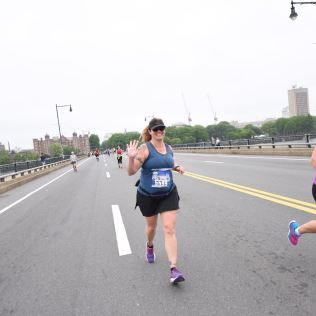 Upon my return, I began thinking in earnest about my overall health. I did the metabolic assessment before the half in Boston, in mid-May. I got tested, measured, weighed — all that delightful stuff — I mean, if you’ve never had a “skin fold” test, you are missing out! Now I have a good understanding of where I am, and where I need to be for the NYC Marathon in November. I have a long way to go. But I will get there. Nothing is impossible.

I started a weights program on 6/15 at a wonderful local gym, and promptly pulled/strained *another* left leg muscle. Sometimes I do dumb things, like over-do the first real gym workout I’d done in, well…. a long time. In the meantime, I skipped a couple of runs out of necessity, but I’m back on track starting yesterday. I think the marathon training plan needs to be modified some — it’s too much, particularly when I know I need to squeeze in the gym 2-3 times/week. The issue I will face in the coming months is the heat and humidity. I hate, and I mean hate, both.

We’re still not at our official marathon training kick-off date (July 4), but I’ve needed this in between time to get my head, and my heart, in the race, if you will. I’m sure you understand.

In the meantime, I am still asking for donations to fund my run and my commitment to Team for Kids. If you’re so inclined to help me out, head on over to my fundraising page and give what you can. Thanks for reading.

This entry was posted in Running Musings. Bookmark the permalink.