Today I went on a trail run through the Rhett’s Run portion of the Cosmo Nature Trail at Cosmo Park, here in CoMo.

Sitting on the Rhett’s Run rock at the beginning of the trail.

That was my third trail run. The first one was a couple years ago (maybe?)… a five mile trail run out at Rock Bridge Park. I didn’t mind it, but it’s much harder to do a trail run, for me anyway, and I assume most people, because there’s no lollygagging. No daydreaming. You focus, or you risk hitting a rock the wrong way, twisting an ankle, or worse. The second trail run I did was more recent and I just freaked out toward the end. Carl was running what I thought was too fast, I couldn’t keep up, I was afraid of falling, or worse, watching him fall. A complete disaster.

No real idea which is the right direction. We did this a lot.

Given all that, I still want to do trail runs. I promised myself this time that I would try not to freak out, and that I would focus on my own run. My own head. It’s all I can do – learn. It was really great! And wow, what a workout. We may have done six miles, but my body feels like I did at least a half marathon. I was a good run I think. I took us two hours to go those six miles, but I’m not worried about either of those things. This was a practice run for me for the Rhett’s Run trail race that we’re going to do in few weeks. It’ll be my first trail race and I’m anxious to see how I do.

It does make me wonder what my real fear is, though. I’m typically a risk-taker. I don’t mind the physical pain that comes with pushing my body to do something it isn’t used to. Could it be so simple as I am a novice, and so I’m scared, frankly, of hurting myself? It could stem from the fall last year that broke my rib. Whatever it is, trail running is something that I’m going to try to tackle. Carl was very patient with me today, explaining some of the ins and outs of trail running to me. And this time I was listening. As I got more into the run, I got more comfortable, and he could tell. That’s a good sign, so I think I’m ready for my next one. Not just yet, though. I need to finish this beer and rest for about a week.

I hope I’m always on the Forget-Me-Not Trail. 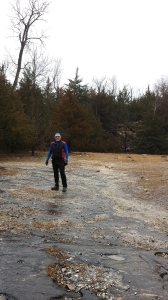 This was a neat clearing of sorts once we found our way back onto the trail. 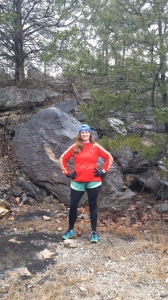 This was a neat clearing of sorts once we found our way back onto the trail.

This entry was posted in Running in CoMo, Winter Running and tagged Trail Runs. Bookmark the permalink.