On an 8 mile treadmill run a few Saturdays ago, I listened to my first podcast while running. I liked it, and am looking forward to using that method of distraction more. I listened to Phedippidations (Fdip) podcast #301 called “Unwrinkling the Runner’s Soul.” Pheidippides, hero of Ancient Greece, is the central figure in a story which was the inspiration for the marathon. 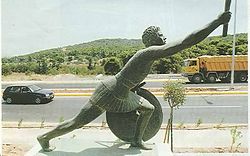 This episode was directed toward new runners, which I’m not, and also for those folks who may fall off the wagon occasionally, and just may need that one sign of inspiration to get them to lace up their shoes again. I am not that person either, though I do struggle some times with getting in a quality run. Even though I’m neither of the people this episode was designed for I still enjoyed it.

It was the third podcast I’ve ever listened to in my life. I’ve recently been dinking around with the podcast app on my iPhone. I came across one of those 2012 summary articles about the best podcasts of the year, and one of them was Phedippidations, so I thought I’d check it out. While I’m not yet a regular podcast listener, something about this one struck me as genuine, insightful, and even funny.

One of the best parts of this episode was the introduction to listeners of Chris Russell and his blog RunRunLive. He’s an experienced runner who was asked to give advice to new runners through this podcast. There was a song played about halfway though – I don’t know the name or the artist, but I liked the words: “Feels like fire. Hurts like hell.” Sometimes running does indeed feel like that… so why? Why on earth do we put ourselves through it? And how, if you’re a new runner, or a runner who hasn’t laced up your shoes in awhile, do you find inspiration to do it again?

I won’t try to repeat what I heard Russell say. The podcast is good, you should just go listen to it. But the title of this post more accurately describes yesterday’s 20 mile training run (21.73 to be exact). I felt badly from the beginning. It was cold, I was groggy (I haven’t been sleeping well lately), and I’m not one of those runners who feeds on the pure torture of an early morning, long, cold, training run. UGH.

It took my body the first couple of miles to realize we were running, kicking and fighting all the way. It takes a lot of mental gamesmanship to trick yourself into continuing the run. All your senses and sensibilities are telling you to just. stop. already.

But I managed to start to feel better, and did up until about mile 10.5. We were at our turn-around spot (that we ran an extra half-mile or so to see — this bridge. There’s one exactly like it about two miles from my house, but this one is on a section of the KATY trail we hadn’t been on before. So it was different. Not really.) 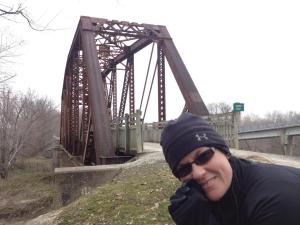 Resting at 10.5 miles before heading back

I did feel better as we started back. But about a mile later we stopped to take a picture of this – one of the last remaining train lights on the KATY trail. This may seem lame, but we were kind of excited to see it. There’s not really much to see on this trail that ultimately covers 200+ miles. Incidentally, with yesterday’s run, I’ve covered about 60 unduplicated miles of it. 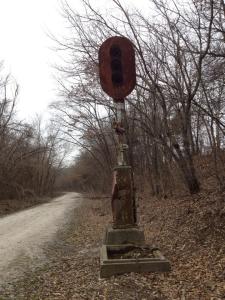 Anyway, we stopped here, and my phone died. What?! I’d looked forward to listening to music on the 10 mile trek back, to distract me from how I felt. Usually music has a tremendous effect on my ability to pound through a few more miles. I get into my own head, pretend I’m a rock star – or better yet in my world, a back-up dancer – and run on. But this was not to be yesterday. No phone, no music. So I was left with my own non-distracted head. Not great when I had been feeling so poorly most of the way. The difficult run turned into an equally difficult mental exercise. I didn’t pass easily with flying colors, but I didn’t fail either. Here we are feeling much better at the end. 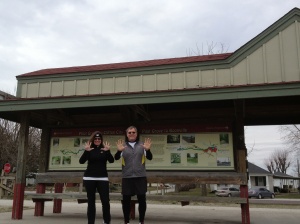 At the end of a 20+ mile training run

So for me, that’s why I do it. It’s hard, REALLY hard, to run 20 miles under any circumstances. Not being fully in the game due to whatever mental or physical distractions I might be experiencing makes it even harder. Sometimes runs, particularly long ones, feel like fire and hurt like hell. But I am strong. And in the end, I can do it. And yesterday, I did it. It wasn’t pretty at times, but I did it. I’m lucky to have a great running partner who says things to me like “you’re not going to let this trail win, are you?” 🙂 No. I am not. The hope is that the really hard ones make the next one better.